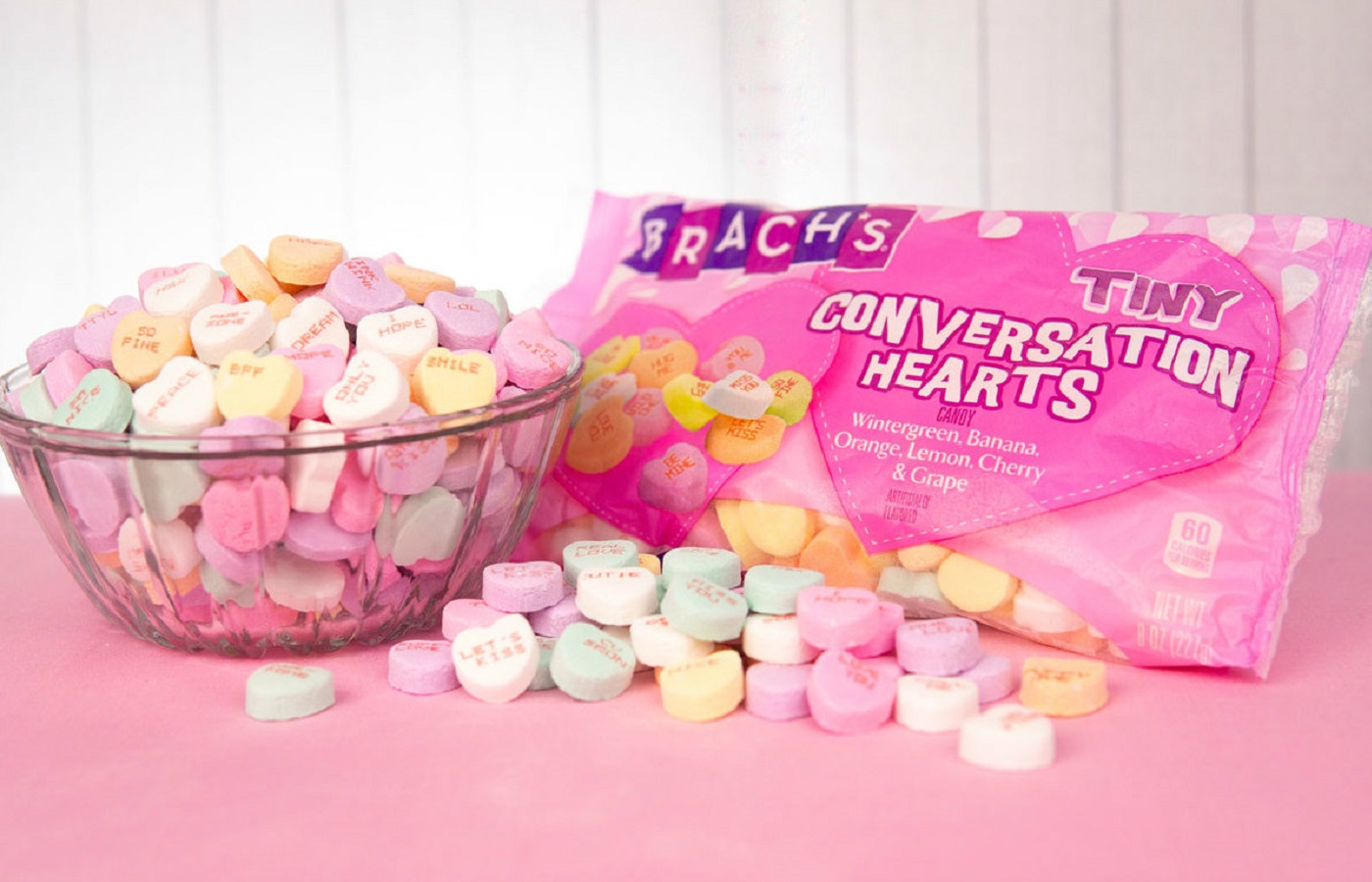 Last week, I explained why conversation hearts might not be as ubiquitous this Valentine’s Day. For those who missed it (and don’t feel like clicking the link I so kindly provided), here’s a recap: Last year, the Necco candy company went out of business, ending production of their iconic SweetHearts. CandyStore.com suggests that SweetHearts were America’s top-selling brand of conversation hearts with as much as 80 percent of the market. The good news for SweetHearts fans is that the brand has since been picked up by another company; however, the new owners weren’t able to get production up and running in time, instead choosing to focus on a relaunch in 2020. As a result, it would seem safe to think that we’ll see fewer conversation hearts on shelves this Valentine’s.

But another candy company you may have heard of — Brach’s — says to hold on a second… because Necco wasn’t the only conversation hearts game in town. Since the 1960s, Brach’s has offered its own Brach’s Conversation Hearts nationwide, and the brand reached out to tell me that this year won’t be any different.

“Brach’s is, and has been, the market leader in Conversation Hearts for several years,” Peter Goldman, Senior Director Brach’s & Seasonal Confections, told me via email. “Brach’s size, texture, colors, sayings, flavors and quality provide the perfect alternative for those Sweethearts customers who haven’t yet switched to Brach’s and are lamenting this year’s lack of Necco Conversation Hearts. We’re excited for Valentine’s Day 2019, as our Brach’s Conversation Hearts are widely available at all mass retailers.”

Brach’s wasn’t through though. The brand also points out that its Conversation Hearts have been far more forward-thinking with their messages as well. “We add new trending phrases and colloquialisms to our Brach’s Conversation Hearts on a regular basis,” Goldman added. “For instance, social media has added a treasure trove of new expressions, acronyms and emoticons that have made their way onto Brach’s Conversation Hearts. Some of our newer sayings include TTYL (Talk To You Later), Adorbz, BFF, H&K (Hugs & Kisses), and LYMY (Love You Miss You). These combine with other contemporary expressions such as Text Me, Yowsa, and ILU to bring this classic Valentine’s Day candy conversation firmly into the 21st century. These newer sayings join timeless and perennially popular phrases that are more common to the category such as Be Mine, Love You, Let’s Kiss, Miss You and Hug Me.”

It all adds up to what has long been Valentine’s Day’s dirty little secret (at least in my opinion): Brach’s have always been the better conversation hearts. SweetHearts were essentially just reshaped Necco Wafers, offering up a similarly underwhelming chalky and powdery texture. Brach’s Conversation Hearts, on the other hand, have just a touch of chew, making them feel like a more coherent candy package and less like something that could fall apart in front of your eyes. Sure, I’ll stand by SweetHearts’ nostalgia value, but Brach’s is right: If you haven’t tried Brach’s Conversation Hearts before, you may be in for a pleasant surprise this February.